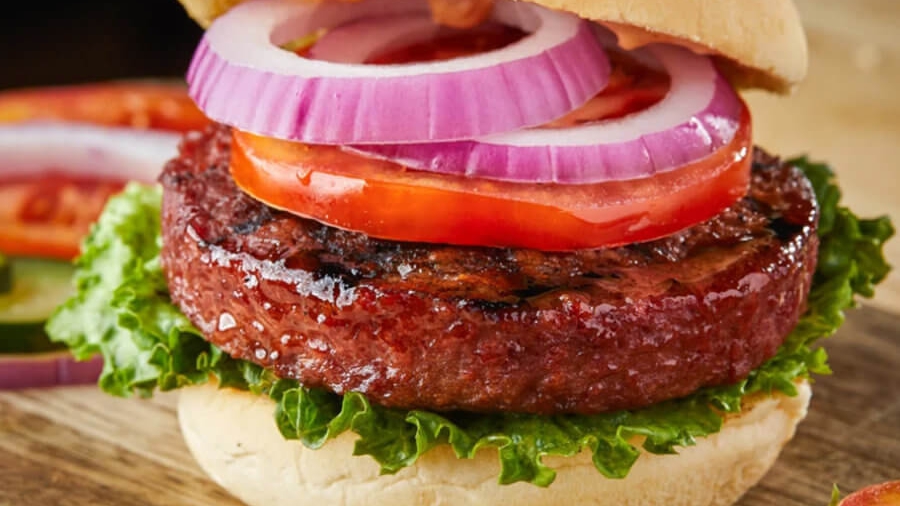 Vegan meat is here. And according to sales data and consumer preference, it’s here to stay.

Food companies are discovering that plants can deliver the same sizzle, bite, and mouthwatering taste as animal-based meat, but without leaving so heavy a mark on our bodies, the planet, and the billions of animals in the food system.

Is Meat Bad For You?

While animal meat has long been viewed as a healthy way to get protein and iron, research continues to point to health hazards.

Meat typically contains high levels of saturated and trans fats, which can raise blood cholesterol. High cholesterol can lead to plaque forming along the inside of the artery walls. This causes the artery to narrow and blood flow to decrease, increasing the risk of stroke, peripheral artery disease, and heart disease. A 2018 study by the Cleveland Clinic found that eating red meat could increase the risk of heart disease 1,000 percent more than a plant-based diet.

In 2015, the World Health Organization (WHO) classified red meat as a Group 2 carcinogen, meaning it probably causes cancer in humans. WHO placed processed meat like bacon and pepperoni in the Group 1 category, which says it is carcinogenic to humans. Tobacco smoking and asbestos are also in this category.

Even small amounts of meat can have a real impact on one’s health. An Oxford University study from earlier this year found that eating just three rashers of bacon a day could increase cancer risk by 20 percent.

Eating meat is also connected to the onset or worsening of diabetes, arthritis, liver disease, and kidney disease.

Is Meat Bad For The Planet?

Animal agriculture is a leading driver of a myriad of environmental issues including water pollution, air pollution, ocean dead zones, and species loss.

Beef production was identified as a leading cause of the Amazon rainforest fires since vast swaths of forest are burned intentionally to make room for the production of beef and animal feed; agriculture accounts for 80 percent of all deforestation according to a report funded by the British and Norwegian governments.

The meat industry is also responsible for a significant percentage of all greenhouse gas emissions, which lead to climate change. Last year, Oxford University researchers conducted the most comprehensive analysis of farming’s impact on the planet ever conducted. The researchers analyzed data from approximately 40,000 farms in 119 countries and concluded that going vegan is the most powerful tool in the fight against climate change. Lead researcher Joseph Poore said adopting a vegan diet is “the single biggest way to reduce your impact on planet Earth, not just greenhouse gases, but global acidification, eutrophication, land use, and water use.”

What Is Vegan Meat?

Plant-based meat is just what it sounds like — meat made from plants. Pea protein, soy protein, wheat, and mushrooms are commonly used to create juicy meat products.

People love vegan meat — the evidence is in the numbers. Data released by The Good Food Institute (GFI) and the Plant Based Foods Association (PBFA) found that vegan meat, chicken, pork, and even seafood are all quickly outpacing their animal-based counterparts.

Sales of vegan meat increased by 37 percent in the past year while sales of animal-based meat only grew by 2 percent. The plant-based meat category is now worth more than $800 million and this figure is climbing. A 67-page report released in July by UBS Group AG, a multinational investment bank and financial services company, said that the plant-based protein market could be valued at $85 billion by 2030.

Unlike animal meat, plant-based meat contains no cholesterol. Dietary cholesterol is only found in animal-based foods, meaning that “veganism is the only truly cholesterol-free diet,” according to Medical News Today.

Vegan meat is also rich in fiber. Compare that to animal meat, which contains zero grams of fiber and plant-based protein becomes even more appealing. Earlier this year, University of Otago researchers discovered a connection between a fiber-rich diet and the reduced risk of multiple diseases. Data from 185 observational studies found that those who consume the most fiber are 15 to 30 percent less likely to die prematurely. Eating fiber-rich foods was also linked to a 16 to 24 percent reduced incidence of type 2 diabetes, stroke, and colon cancer.

A Harvard study, which included more than 40,000 healthy men, found that a diet rich in fiber may reduce the risk of coronary heart disease by 40 percent.

Health, the environment, and ethics are seeing more people swap their meat for plants. Major British supermarket Sainsbury’s released data earlier this year showing that 91 percent of Brits are now flexitarian –  people who eat animal products but focus on including more plant-based food in their diet.

Another recent survey found that 80 percent of Americans want to replace meat with vegan food. A poll by Angus Reid found that 70 percent of Canadians believe vegan meat is not a passing fad but a movement that is here to stay, and a recent report predicts that the popularity of plant-based meat will boost Australia’s economy by $3 billion by 2030.