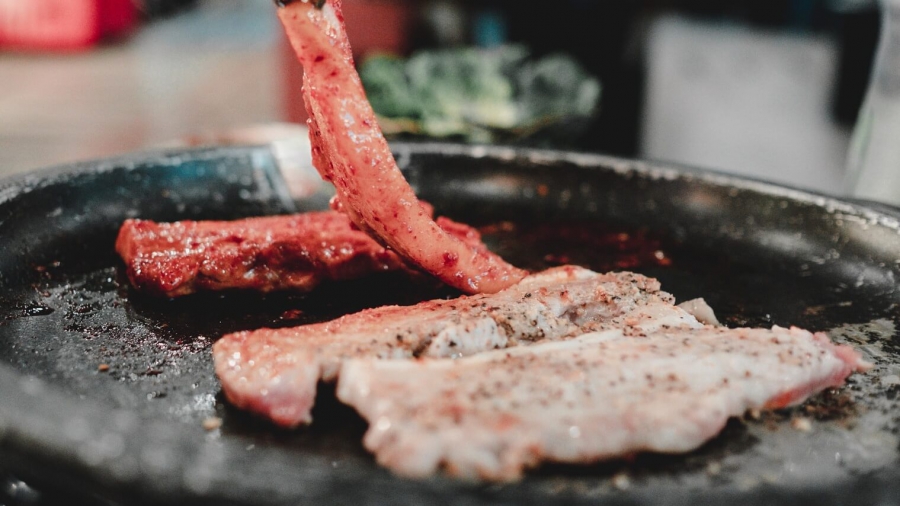 What is Red Meat Really Doing to the Planet?

According to the United Nations, we have under 12 years to prevent a major climate change crisis. Ditching red meat is one way to reduce your impact on the planet, and it benefits your health too.

What Is Red Meat?

Red meat is a red color when raw and then turns dark after it’s cooked. White meat, in contrast, has a paler pink color to it — think raw chicken. As the name suggests, it turns white when cooked.

Red and processed meat consumption are linked to an increased risk of a number of diseases and serious health conditions, including heart disease, diabetes, colon cancer, and rectal cancer.

One psychologist believes the risk of eating red meat is so great, warnings should be placed on packaging, just like with cigarettes and tobacco. “The western world would be a far healthier and happier place if the food industry were regulated in a truthful manner,” Emma Kenny — an advisor to Food Standards Scotland — told the Herald last year.

Others have suggested that placing a tax on red and processed meat could save thousands of lives. A study at the end of last year revealed that 6,000 UK deaths a year could be prevented with such a tax. Globally, 220,000 lives could be saved by 2020, it noted. A meat tax could also reduce healthcare costs by £30.7 billion.

Lead researcher Dr. Marco Springmann said in a statement, “the consumption of red and processed meat exceeds recommended levels in most high and middle-income countries. This is having significant impacts on only on personal health, but also on healthcare systems, which are taxpayer-funded in many countries.”

He added that the economy would also perform better, as it is currently “losing its labor force due to ill health and care for family members who fall ill.”

Red meat isn’t just bad for human health, but it’s bad for the planet’s health too.

Beef production is particularly harmful; it requires 160 times more land and produces 11 times more greenhouse gases than staple plant-based foods such as potatoes, wheat, and rice. For every kilogram of beef produced, the equivalent of 36 kilograms of CO2 is released into the atmosphere.

Beef production is also responsible for huge amounts of deforestation. Reports of the Amazon rainforest fires recently dominated headlines. Many of these fires were started purposefully by cattle farmers, who were clearing land for beef production.

The scientific director of Brazilian NGO IPAM (Institute of Environmental Research in Amazona) said in a statement, “these are not wildfires, but rather fires set by people seeking to create cattle ranches, intentionally ignited during the dry season each year.“

She explained, “they cut the trees, leave the wood to dry and later put fire to it, so that the ashes can fertilize the soil.”

Lamb also has a high carbon footprint. Some believe it’s even higher than beef. According to the Environmental Working Group, this is because lambs produce less edible meat than cows. In 2018, the World Wildlife Group (WWF) stated that lamb cawl — a Welsh stew — had one of the worst carbon footprints of all of the UK’s most popular meals.

According to WWF, just one bowl of lamb cawl produces 5.9 kilos of CO2 emissions. This is the same as boiling the kettle 258 times or driving 31 miles in the car.

Last year, the United Nations Environment Program said tackling meat consumption is one of the world’s most “urgent problems.” It stated, “the greenhouse gas footprint of animal agriculture rivals that of every car, truck, bus, ship, airplane, and rocket ship combined. There is no pathway to achieve the Paris climate objectives without a massive decrease in the scale of animal agriculture.”