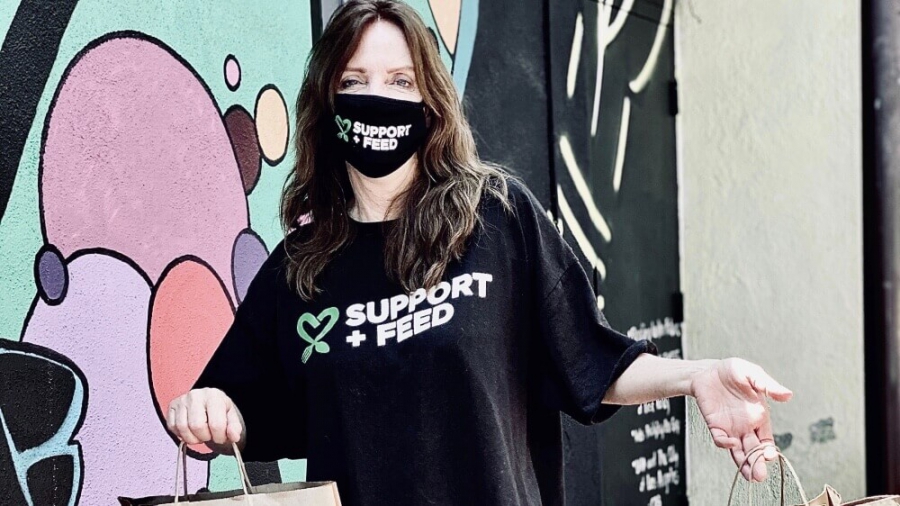 Approximately one out of every six American children currently struggle with food insecurity. According to Support + Feed, in the wake of the pandemic, 30 million children will experience hunger this summer.

Across the globe, people are experiencing hunger and financial hardships due to loss of income amid the coronavirus pandemic. An estimated 265 million people could face acute food insecurity by the end of the year. This is according to the United Nations World Food Programme. This figure is up from 135 million people before the start of COVID-19.

As part of the campaign, Support + Feed is working to feed as many children as it can. Recently, the organization donated 500 plant-based meals to the Boys and Girls Club of Metro LA (BGCMLA). LIVEKINDLY sponsored the meal donation.

Maggie Baird, the founder of Support + Feed, told LIVEKINDLY she chose to partner with BGCMLA because of the work it does to support the local communities.“We were so inspired by and excited to choose the Boys and Girls Club of Metro LA for this partnership. They do incredible work in their communities and are helping so many children and families. And we just want to support their mission, be an ally to their work, and provide them with healthy plant-based meals. It’s really an honor to work with them,” said Baird.

The BGCMLA has five clubhouses in Los Angeles with nearly 1,500 members throughout the region. Support + Feed was able to provide meals to all five of the locations, one of which—the Challengers Clubhouse—is the largest in the region.

“We are immensely grateful for and excited about our on-going partnership with Support and Feed,” said Kim Washington, Vice President, Resource Development of Boys & Girls Clubs of Metro Los Angeles.

She continued: “At a time when food insecurity is a daily concern for families in our communities, Support + Feed and their partnering restaurants and contributing donors support our food distribution efforts, enabling us to continue providing nutritious food to those families who need us most.”

“We are incredibly proud to support this initiative. We were moved to help elevate Support + Feed’s message and mission of providing healthy, plant-based meals to those in need during the pandemic,” said Jodi Monelle, founder of LIVEKINDLY Media.

The vegan meals were provided by popular Los Angeles vegan restaurant, Sage Plant-Based Bistro. Each meal featured a healthy burrito and tortilla chips. The restaurant chose the meal because the children could take it to-go.

Chef Mollie Engelhart⁠—the restaurant’s owner, operator, and head chef⁠—told LIVEKINDLY that providing healthy meals to those who would have otherwise not had access to them is a cause she strongly supports.

“Having a safe space to play and healthy food to eat is vital in the child development process. These organizations make sure that is happening for so many young children experiencing insecurities,” she said.

She continued: “Working for organizations like the Boys and Girls Club […] has been rewarding. I think it’s important to take action in the world and make a difference in a real tangible way. The reality is that helping people has to happen in the real world interacting directly to make a lasting impact. People need to see that they are valued.”

Vegan entrepreneur John Lewis, also known as  Badass Vegan, has lent a hand in delivering the vegan meals for Support + Feed previously. Lewis is producing and directing a documentary called “They’re Trying to Kill Us” alongside “What the Health” filmmaker Keegan Kuhn. The new film looks at food insecurity in Black communities “told through the lens of Hip Hop and urban culture.”

Lewis believes it’s important for children to have access to healthy, plant-based food. “They need to develop healthy habits early so that they can have a healthy start. It is tougher to change habits in adulthood—even though it can still be done,” he said.

“I know that we are planting a seed of hope for these people. We are showing them that not only is there someone out there that cares about [them], but that there are people who want to see them flourish. The smiles on their faces are the best reward you can ever receive,” he added.

In addition to Sage Bistro, Support + Feed has partnered with a number of other vegan restaurants to deliver plant-based meals across Los Angeles, New York City, and Philadelphia. Restaurants include Jackfruit Café, Beyond Vegan, Monty’s Good Burger, Nic’s on Beverly, and Crossroads Kitchen in Los Angeles. In New York City, restaurants include Beyond Sushi and Urban Vegan Kitchen, as well as Hip City Veg and Bar Bombon in Philadelphia.

“So we created a platform where we could provide plant-based, healthy, nutritious meals to people in need. And, in turn, help the restaurants and everyone involved with them from the farmers to the cooks,” Baird told LIVEKINDLY.

She added: “It was wonderful to be able to feed Five Boys and Girls clubs the same delicious meal on the same day and all of the clubs were so grateful to receive them!”

Baird explained she also wanted to help the planet by reducing people’s meat intake. “[E]very plant-based meal served is one meal that doesn’t contain meat, the production of which, is so harmful to our Earth,” she said.

Baird says she’s humbled by the outpouring of support.“Knowing that we’re feeding so many people plant-based meals, hearing the comments of how delicious and nourishing the food is to their souls, and helping small businesses stay open, has been very rewarding.”

Support + Feed has grown into a social movement. The organization says it’s nourishing souls as much as bodies. And for the most vulnerable, that comes by way of healthy, plant-based meals. To learn more about the initiative, or to make a donation, visit SupportandFeed.com.