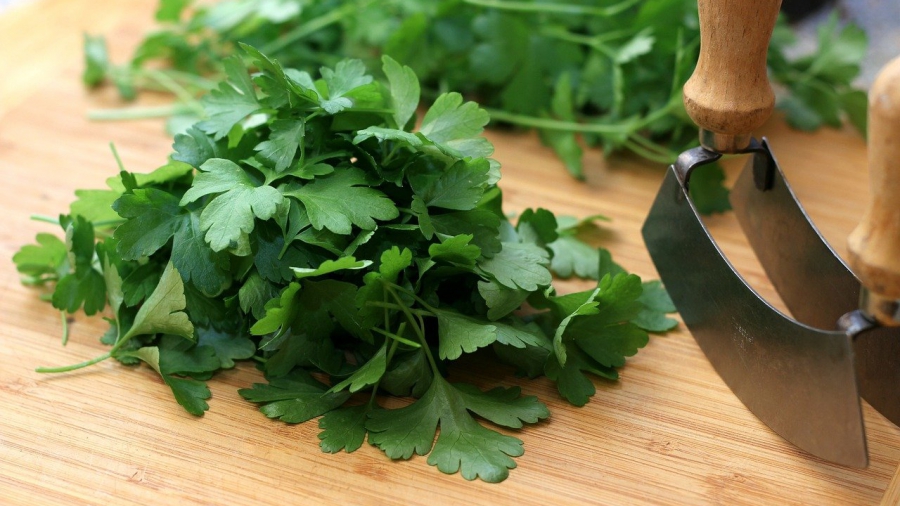 It’s the time of year to bring nature inside, to perk up the air and the indoor scenery. Parsley is an easy way to do this. Place a few pots of these perky plants around the house to cleanse the air and the palate. Parsley can be displayed as a spritely bouquet, mixed with other fresh herbs (such as basil, rosemary, or sage), or with dried flowers or grasses, or as a potted plant.

There are two main types of parsley: flat and curly leafed. Curly parsley, when stored properly, is very crisp. This crispiness adds texture and color when added to dishes just before serving. Curly leafed parsley holds its shape best under refrigeration, when wrapped in a damp towel. Flat parsley is the “flavor” parsley.  Flat parsley is one of the essential ingredients in the classic bouquet garni, or packet of herbs and spices used to flavor broths and just about any savory dish. Combine flat parsley with tarragon, chives, and chervil, and you have the traditional French flavoring blend of  “fines herbes,” or fine herbs, which can be cooked with or sprinkled on steamed, grilled, or roasted vegetables, potatoes, mushrooms, and grains.

Chopped and added at the last possible second, parsley perks up sauces and salads. There is very little that does not spiff up with the addition of parsley: think rice dishes, vegetables, scrambled or grilled tofu, pasta, or seitan steaks. Parsley can serve as a back-up to basil in pestos. Deep-fried for a split second, curly leaf parsley makes an even curlier garnish. Think of a cuisine, such as Middle Eastern, Eastern European, Central American, or South East Asian, and parsley is there.

Persillade and gremolada are two well-known sauces which have parsley as one of the main ingredients. Persillade, a French sauce, is a sautéed mixture of finely chopped parsley and fresh garlic. Persillade is used as a finishing touch for grilled foods. Gremolada is a Milanese condiment made of sautéed parsley, garlic, lemon, and orange zest. This mixture can be spread over veggie burgers or roasts just a few minutes prior to removing from the grill or oven, or used with breads (as in garlic bread), soups, or sauces. If you are watching your sodium intake, try a parsley blend of finely minced dried parsley, marjoram, and thyme. 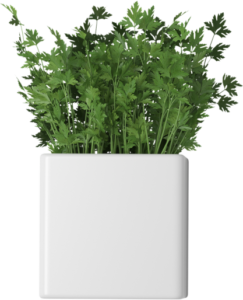 Parsley is mentioned often throughout history, and not only for its culinary and medicinal properties. The early Greeks made crowns of parsley to bestow upon the winners of sports competitions, in the same wat that bay wreaths honored the Roman Olympians. Parsley is used in the Jewish celebration of Passover as a symbol of spring and rebirth. Parsley is mentioned as one of the plants in the gardens of Charlemagne and Catherine de Medici. Rumor has it that Medici is responsible for popularizing parsley when she brought it back to France from its native Italy. As far back as Hippocrates, the “first” physician,” parsley was used in medicinal recipes as a general “good for what ails you” tonic.

Parsley is rich in vitamins and minerals, particularly vitamins A and C, and in antioxidants. The high chlorophyll content seems to act as a breath freshener. Researchers have isolated a compound, apiol, which is now used in medications to treat kidney ailments and kidney stones.

Parsley is best used fresh, but can also be used frozen or dried. If you have an abundance of fresh parsley, you can freeze for later use by washing, patting dry, and freezing, leaf and stem, covered, in a single layer. Parsley may be dried by washing, patting dry, removing stems, spreading on a baking sheet, and drying in a low oven, around 200 degrees. Store dried parsley in an air-tight container. With so many ways to use parsley in the kitchen, it might be nice to grow a pot or two of each variety.