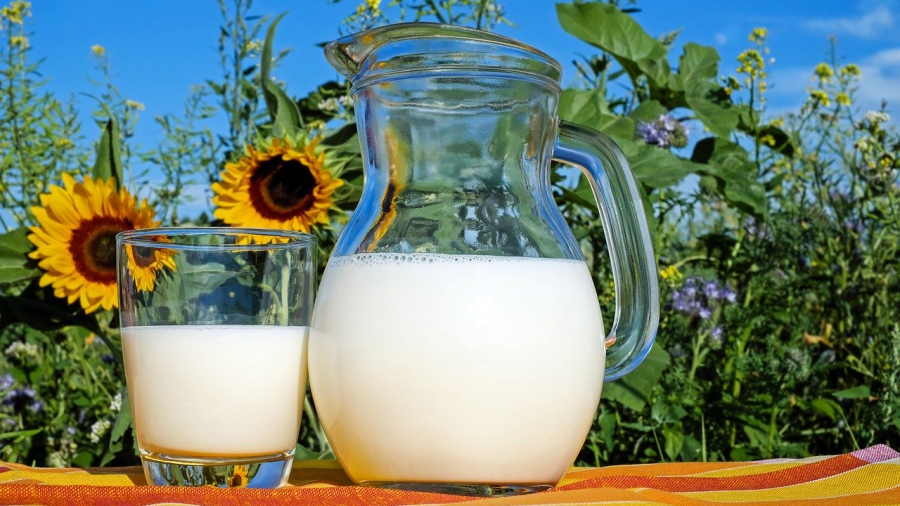 According to evolutionary history and fossil records, the modern human being has inhabited this earth for the past 200,000 years. (1) Historians date the practice of drinking cows’ milk back to the past 8,000 to 10,000 years. (2) What this tells us is that consuming the milk of another species isn’t instinctual, and our bodies don’t naturally “crave” it. So the question is—which one of our brilliant ancestors looked at a cow’s udder, licked their lips, and started sucking? Perhaps more importantly, why did others join in? Relative to human existence, the history of milk is considerably short—yet it is truly riveting. Power, corruption, greed, mass manipulation—all are present in the evolution of milk in our modern day society. Thanks to the bizarre thinking of that early human, most of us are guzzling down a substance not meant for human consumption. It’s time to leave cows’ milk to the textbooks, and of course, to baby cows

Fast-forward through the evolution of lactase persistence in European regions (yes, all early humans were lactose intolerant past their toddler stage), domestication of dairy cows, the invention of cheesemaking, millions of people who died from milk-borne illnesses prior to the invention of pasteurization (a fourth of all food-borne illnesses in the US were attributed to cows’ milk prior to the early 1900s), and the invention of the glass milk bottle, and we find ourselves in 1922 with the seminal passing of the Capper-Volstead Act. (3) This bill gave agricultural industries permission to act together, form organizations, and market their product. While the industry was very much reliant on small farms back in the day, this bill paved the way for the enormous dairy conglomerates and massive milk marketing campaigns of today. Without it, the American people would have never known the phrase “Got Milk?”.

The Popularization of Skim Milk

Before pressing further, a note on skim milk. Prior to the 1930s, most of it was literally sent down river. Families who drank milk had one option—whole—but skim milk still existed as a byproduct of the butter making process. This “waste” was commonly disposed of by dumping it into rivers throughout the 1920s until the government was forced to put a stop to it due to the horrific odor of spoiled milk that permeated the surrounding areas. It wasn’t until the 1950s that skim milk received some commercial attention, though this was in the form of a dry, powdered, “just add water!” mix. (4) As awful as instant milk powder sounds today, we can’t blame our grandparents—instant was all the rage back then. The industry also had plenty of skim milk to get rid of, as much of it was left over from WWII when dry milk powder was used as a relief food. To chisel down this surplus, the industry employed skilled marketers to position skim milk as a weight loss food. Milk dealers received backing from physicians to pedal this product as a health food, and by the 1950s, skim milk had transformed from a waste byproduct to a trendy weight loss beverage mostly consumed by affluent society. (15) In reality, farmers just needed a way to get rid of (and profit of off) the skim milk they had made during the war effort … which tends to be a theme in milk’s history: made too much? Turn to clever marketing.

Let’s hop back to WWI—the global event that catapulted America’s century-long milk surplus into existence. (5) The US government started sending canned and powdered milk to soldiers overseas, and dairy farmers responded by ramping up production. They invested in the latest equipment and even abandoned other forms of farming to dedicate their work to the war effort. While the war ended, the milk production did not—creating a surplus and dangerously low milk prices. Throughout the 1930s, dairy farmers staged several strikes and unionized to demand a fair price for their milk. (2) To appease these farmers, the government created federal programs to artificially drive demand. The first of these programs included the 1940 Federal Milk Program for Schools and federally subsidized milk advertising under the Works Progress Administration. In 1946, President Truman passed the National School Lunch Act, which mandated each lunch include between 1 ½ to 2 pints of whole milk. In essence, since adults weren’t buying milk, the government solution was to force it onto their children. To this day, children who participate in the National School Lunch Program—which offers free or low-cost lunches to students of low-income families—are required to take a carton of dairy milk. (6)

Despite the government-funded campaigns to convince nearly every demographic of American to drink more milk, the surplus continued throughout the decades. In 1977, President Jimmy Carter allowed $2 billion federal dollars to be funneled into the dairy industry over the course of four years. (7) As in the past, dairy farmers ramped up production to take advantage of this government subsidy, which resulted in yet a greater surplus. This soon-to-rot milk was homogenized into “government cheese,” and held in vast underground storage units across 35 states. Not only was this a waste—it was also expensive. In 1982, a New York Times reporter stated that the federal government would spend $40 to $50 million transporting this surplus dairy, and another $40 to $50 million to store it. (8) By this time, the government was spending $2 billion in taxpayer dollars annually to support the dairy subsidy. The solution was twofold: give the nearly moldy cheese to low-income citizens, and funnel money into heavy dairy marketing.

Introducing the Dairy Checkoff Program—an industry-funded federal program that has a profound impact on what Americans choose to consume. Prompted by the dairy industry, Congress created the National Dairy Promotion and Research Board in 1983 whose sole purpose was to promote dairy products by way of marketing and “nutritional education.” (9) To fund this effort, dairy farmers agreed to pay a small fee based on the weight of the milk they sold. This program is responsible for some of America’s most craveable (and least healthy) food products including the Pizza Hut’s Stuffed Crust Pizza and Taco Bell’s Quesalupa and succeeding Quesarito. The Board has worked with dozens of companies to promote dairy-heavy menu items—the result is 40 percent more cheese on Domino’s pizzas, more milky drinks at Starbucks, and larger cheese slices on Egg McMuffins. (10, 11, 12)

In addition to these corporate collaborations, the checkoff program is also responsible for the pro-dairy slogans we can never forget—ever heard of Got Milk? or that “milk does a body good?” It’s all for promotion’s sake. The illusion that chocolate milk is a recovery food is also an industry-supported idea. The studies that demonstrated a positive correlation between athletic performance and chocolate milk were funded—at least in part—by the dairy industry and specifically designed to favor dairy. Scientists ensured the industry’s desired result by comparing chocolate milk to water or a nutritionally deficient sports drink. (13) Of course, most constituents don’t read beyond the fold, let alone analyze scientific studies. People see the professional athlete sporting a milk mustache when they flip the page in a magazine, or they scroll through the headlines and see that a new study confirms the benefits of chocolate milk in teen athletes, and they’re reminded to add milk to their grocery list. Milk has become so ingrained in our culture that we cannot see past the smoke and mirrors to what milk really is—a century-long problem the government cannot spend enough money to get rid of, no matter how much cheese Pizza Hut stuffs into its crust.

Looking back at the history, we can see that milk isn’t a health food—it’s just a very heavily funded and well-marketed product. If that ancestor had decided to suckle a dog instead of a cow, we all might be drinking dog milk; or if there was a mass surplus of soda in the early 1900s and the soda producers balked loudly enough, cola could have been today’s pre-workout beverage. We believe milk is healthy because that is what we have been told, and there has been little to question this—until now. Let’s start asking questions. Why do adults still drink milk? Why do we obtain it from an entirely different species, let alone a being that is not our mother? Why do we continue to guzzle down a drink that leaves us bloated and uncomfortable hours later? It simply does not make sense.

1.Valente, Lana. “The Origins of Milk: Why Was the First Cow Milked in the First Place?” Medium, Medium, 8 May 2017, https://medium.com/@lanavalente/the-origins-of-milk-why-did-the-first-cow-milker-milk-the-cow-c41e8ef761d6.

Published with permission from Switch 4 Good. A great resource for dairy free living